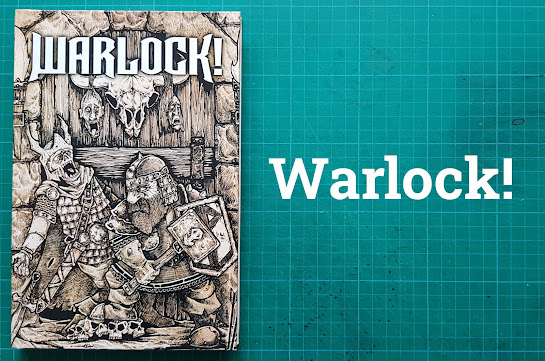 Not entirely sure what put me on to Warlock! in the first place (though I would have got there eventually via the Mud & Blood podcast), apparently it single handedly created the #BOSR hashtag (British OSR), and is a completely understandable reaction by the author to the over-complex mess that is WFRP 4e.

Warlock! takes the careers and ethos of WFRP and marries them to the simple stats of Fighting Fantasy (via Troika!), so you have simply Stamina, Luck and a bunch of Skills. The key departure from its inspiration is that its d20 based, roll + skill and score over 20 to succeed, with combat being simple opposed tests. Characters are rounded out with some OSR like career specific random details (What you’ve seen, Who you know etc). It makes me wonder if WFRP was a big influence on Electric Bastionland (re random careers and flavour).

If I had discovered this before I bought WFRP 4e I think I would have used this for playing The Enemy Within.

An elegant little detail I like; each career has its eponymous skill, so if you are a Beggar you get the skill Beggar and this is an average of all your career skills (careers are simply defined by their skills, starting possessions and the random details). Your Stamina increases by 1 when your career skill does (which amounts to every 5 improvements in your career skills). I like this clear indication of ‘level’, WFRP 4e does something similar, but nowhere near as clear or satisfying with no actual career skill. There's no explicit guidance on how to use this skill, but even if it was simply just to make money at your career that would be reason enough.

Combat is similar to WFRP but also feels like a cleaner version; damage done to Stamina is considered  just bruising and fatigue, but once Stamina is depleted every hit is a roll on the critical table with negative Stamina as a modifier. Stamina is regained quickly, criticals affect the character and take time to recover from or just outright kill.

All characters can use magic, they simply require the knowledge of spells via scrolls or books (Initiates & Wizards start with one random spell each). An Incantation Skill roll must be succeeded to cast and each spell consumes an amount of stamina whether successful or not. There is also a miscast table.

I just had a quick go at the combat right now, my Beggar equipped with a club vs an unarmoured, short sword wielding goblin. I did the goblin some damage but got butchered; the 2nd critical killed me after 5 or 6 rounds. It felt pretty fast. The attacker in the opposed roll gets a +5, which I was thinking in the case of evenly matched opponents would lend the combatant with  the initiative a big advantage, it didn’t help me too much though. I missed once with my 1d6-1 damage club when the goblin hit with his 1d6 + 3 shortsword. Our skills were matched and my Stamina (17) was almost double that of the Goblin (10), but the disparity in weapon damage was too much. 1d6-1 seems pretty stingy for a club! Also I’m surprised it doesn’t have critical hits on a straight 20, though the fight would have been even shorter then as that was one lucky Goblin.

I’d be tempted to use this for our WFRP campaign if I thought I could get it past the players, though keep WFRP Success Levels and make all weapons do their average damage plus the success level. Hmm.

I bought Warlock! from DriveThru